Skip to content
HomeRules for Reactionaries and Soccer Nazis

Mark Yuray posted this image from his Rules from Reactionaries 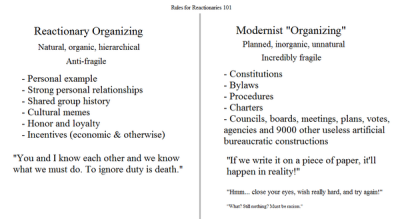 A strange thing is happening within the Bundesliga, the German soccer league that has some of the highest average stadium attendance in the world: Far-right hooligans affiliated to various clubs are putting their differences aside to unite against Islamic fundamentalists.

Now, of course, this article is written by a Marxist, and commies see fascists and Nazi’s under the bed and in their waking nightmares. Because of this mental defect of Marxists, I don’t put much stock in this supposed mass movement of Soccer Nazis. I have the feeling that what we are seeing is a nationalist movement, and some Neo-Nazis are joining in the fun. I watched the Tea Party movement in the US tarred with the Nazi brush in the media, while all I saw were middle-aged and middle-class White Americans trying to use Leftist tactics to ‘take back their country’. So, I always tend to scoff when a wild-eyed foamy-mouthed commie points a trembling finger at a new batch of Nazis peering out of the closet when the lights go out. Pretty sure this is just good ole nationalism at work.

Of course, Neoreactionaries have noted that protests and mob actions are Leftist (again, Rules for Reactionaries):

Nick Land lists “theory, protest and seizing power” as three “distinct functions” of a possible organization. He rightly dismisses mere protest as a “pathological symptom.” I will take a step further and similarly dismiss “seizing power.” To “seize” power from someone almost certainly implies a kind of Alinksyite coup, and is not rightist at all. A parasite “seizes” power. The function of a practical reactionary group must be the generation of power, not the seizing of it. Such a rightist group must function as a factory for social capital — to foster order among members, intra- and inter-personally.

I can agree that the soccer protesters are using Leftist tactics, just as the Tea Party attempted to use them with their Restoring Honor rallies and Tax Day protests. Of course, I haven’t heard of any body counts or looting from soccer protests or Tea Party protests, so they do appear to have some semblance of order, in contrast to the Ferguson protests. They appear to be the work of Rightists who simply don’t know how to think any other way than as a Leftist. That’s perfectly understandable considering the psychological dominance of the Left.

I wanted to look at Yuray’s list of Reactionary Organizing and compare German soccer groups, the Tea Party and #GamerGaters.

The soccer protests do appear to be natural and organic, though they do not appear to be hierarchical. I’m sure there are some leaders somewhere, but they appear to be organized in cells. This is similar to the organic appearance of the Tea Party in the US: a group of distributed cells, acting autonomously. This autonomous cell organization is definitely anti-fragile. So, 3 out of 4.

As to hierarchy, how could a right-wing group possibly build a hierarchical organization of any size without being found-out and infiltrated by the Left? With the current surveillance of all communication, and communication is key to organizing large groups, how could there be any operational security? Wouldn’t the appearance of any organized large scale hierarchy create opportunities to take the node via the head? I think that anti-fragility demands micro-hierarchies. Read The Way of Men. They way of men is the way of the gang. Small, tight-knit groups of brothers. How is #GamerGate winning? With autonomous cells acting in concert, and a socially self-selected meritocracy emerging. They have definitely proven to be natural, organic and anti-fragile.

Tea Party groups are organized locally, around leaders who self-select and direct the others. They work very hard and take significant personal exposure to flak. This is how the gangs are formed, by local leaders, face to face. I’m not in Germany, but my spidey sense tells me that similar forces are at work. Again, it’s hard not to think like a Leftist when that is all you know, so the problem here is not interpersonal organization, it is lack of direction. I think the personal example and work of the InternetAristocrat was a key driving factor behind the success of GamerGate. The GamerGaters have virtualized relationships, though. Can we call these ‘personal’? Perhaps. The Aristocrat provided call to action and the direction the Gamers needed.

“Shared Group History”
In German, the soccer groups have their national heritage, and I believe that nationalism is the driving force there. Exactly the same with the Tea Party. The soccer protesters also have their team identities, they identify with proxy-warriors (soccer players) and are organized into tribes (teams). Jonathan Haidt believes that our human need for tribe is the driving force behind team fanaticism. I also believe that sports are proxies for actual violent warfare, which is an innate need of men. Does GamerGaters organizing into war parties in MMORPGs, MMOFPS’s, playing the same games, talking about the same games constitute a ‘shared group history’?

“Honor and Loyalty”
German soccer team loyalty is obvious. Loyalty to America and the ideals of the Founding Fathers. Many (most?) Tea Party members say the Pledge of Allegiance at every gathering, but Republicans do not. Tea Party members honor soldiers and dedication to ‘America’ (nationalism). Do GamerGaters exhibit this same honor and loyalty? Is it generated from online gameplay? Can proxy masculine activities such as virtualized warfare actually generate honor and loyalty similar to real world interactions?

“Incentives (economic and otherwise)”
There are a number of factors which motivate German soccer fans, Tea Party members and GamerGaters. They must exist, or why would they get off the couch? Can’t the same be said for Social Justice Warriors? I’m not sure what to make of this.

I’m making the case that both German soccer groups and the Tea Party groups are Reactionary forces who are directionless due to Leftist indoctrination. They are using the tactics of the past wars in the setting of modern warfare and are doomed to fail. You cannot win the current war by fighting the last war. The groups have some features that are adaptive, such as organization as distributed autonomous cells.

It appears that the Less Wrongians see GamerGate as imbued with the spirit of Neoreaction, because direct control is obviously a joke. I think they are correct that the GamerGate war is reactionary in nature. But why? I’ll get to that below.

I find it interesting to see real world reactionary forces emerging, such as Phalanx and the Hestia Society with the goal of organizing in meat space. At this time, I believe that only micro-hierarchies, gangs of men no larger than a platoon (13 men) will be viable and able to sniff out entryists. But where is the action happening? GamerGate.

Have you read Jim’s Gamergate and corruption entry? This is an amazing quote from Gawker’s How We Got Rolled by the Dishonest Fascists of Gamergate:

Intel is run by craven idiots. It employs pusillanimous morons. It lacks integrity. It folded to misogynists and bigots who objected to a woman who had done nothing more than write a piece claiming a place in the world of video games. And even when confronted with its own thoughtlessness and irresponsibility, it could not properly right its wrongs.

Transparent and documented though it was, the obsessive campaign worked. Mercedes-Benz—listed on the site as a former partner, and therefore a target—briefly paused its ads on a network that serves ads to Gawker. I’ve been told that we’ve lost thousands of dollars already, and could potentially lose thousands more, if not millions.

I believe that the battlefield open to us is virtual and it is economic. All the real world power structures are held by the Left. On the Internet, new structures (8Chan) are forming and captured nodes (Gawker, Kotaku, 4Chan etc.) can simply be abandoned. GamerGaters attacked the corporate sponsorship of the Left, and it worked. Soccer groups and Tea Party members attempted to build support through the media and government (both held by the Left) and have had far less success.

Left is chaos is entropy is uniformity is democracy is violence is war is death. Right is order is rule is absolutism is civilization is differentiation is flourishing is peace is life.

I would add something: Left is Feminine and Right is Masculine. Video games are a male dominated space, not a neutered ‘safe’ space for females. Soccer hooliganism is male. Sports fanaticism in general is male dominated. Hunting is male, as are shooting sports in general. Reactionary forces are to be found in male spaces. If you’re wanting to be Reactionary, go bond with other men. Create spaces that are not female friendly. Create gangs. Form teams. Battle for dominance. Focus on activities which are violent or proxies for violence. Have fun. Then look for Leftist attacks against your group. Lead your platoon to take the fight to the corporations that support your enemies. This is the virtual equivalent of cutting off their supply lines. It doesn’t matter if the men in your platoon have ever heard of Reaction. Ideological submission is not necessary, what is necessary is that it is male and results in pain for the Left.

What were the GamerGaters fighting for? The right to have fun as men. This is what makes GamerGate reactionary. Have fun with other men. Be men. Agitate with your fellow men that the bitches are always trying to butt in and take away our fun. It’s hard to convince other men that the Left is an existential threat that needs to be attacked, but convincing them that Leftists are a bunch of busy-body spinster social justice warriors out to ruin a good time? That’s an easy sell, and the results are the same: organized men acting together to fight the Left. Not politicking. Not picketing. Not protesting. Not giving interviews. Cutting off the money, squeezing their lifeblood out, going for the throat. Men sharing a common bond and fighting to defend it.

I don’t expect a Reactionary hierarchy to emerge any time soon. If you’re waiting for that, then you might be trying to fight the last war. I expect to see distributed autonomous cells of bonded men working to attack the supply lines of the Left. Building out this system, learning from the InternetAristocrat (moral outrage, documentation, direction) and the GamerGate tactics, is where I see fertile ground for Reactionary forces.

One thought on “Rules for Reactionaries and Soccer Nazis”